Hair metal heroes, Steel Panther, Death To All But Metal (and any notions of Political Correctness)

At the Academy in Glasgow tonight to see Steel Panther, it takes a bit of time to get into the hall so the first of two support acts are already on stage. Wayward Sons are a straight-ahead Hard Rock outfit and are pretty good, just the right kinda thing for the slowly swelling crowd to get moving too.

Up next are Inglorious, these guys have a much bigger stage presence than the openers tonight, and they seem to be a real mix of styles visually. The Lead singer, a large dude with long blonde curly hair and resplendent in a black, velvet and glittery blazer jacket He is a natural showman with a seriously impressive vocal range. The sound mix for these guys isn’t great as the guitars are not loud enough and the solos are not easily made out, this detracts from what promised to be a really notable support slot. It’s not dampened the crowds’ enthusiasm one bit.

The Sell-Out crowd at the Academy are raucous and impatient for the main act, many having dressed in late 80s early 90s Metal fashions in tribute to the era that Steel Panther parody so faithfully.

They come on stage with the trademark swagger of a band who are at the top of their game or at least give the appearance and open with Supersonic Sex Machine from the Balls Out album, the Glasgow crowd are possibly the most excitable and animated I have seen at the Academy. There is lots of crowd surfing. Between the opener and the next track, there was a bit of banter to set up the overtly sexual overtones but this went on and on and, don’t get me wrong the band interplay and larking about is done well and very funny, but I found myself thinking, get on with it!

When they finally got back round to the job in hand they struck into one of the best tracks from their debut album Eyes Of A Panther and then into the sexually aggressive Goin’ In The Backdoor from their new album. This was accompanied by gratuitous hand actions from Satchel when he was playing blistering guitar solo’s, nothing comedy about his guitar skills. 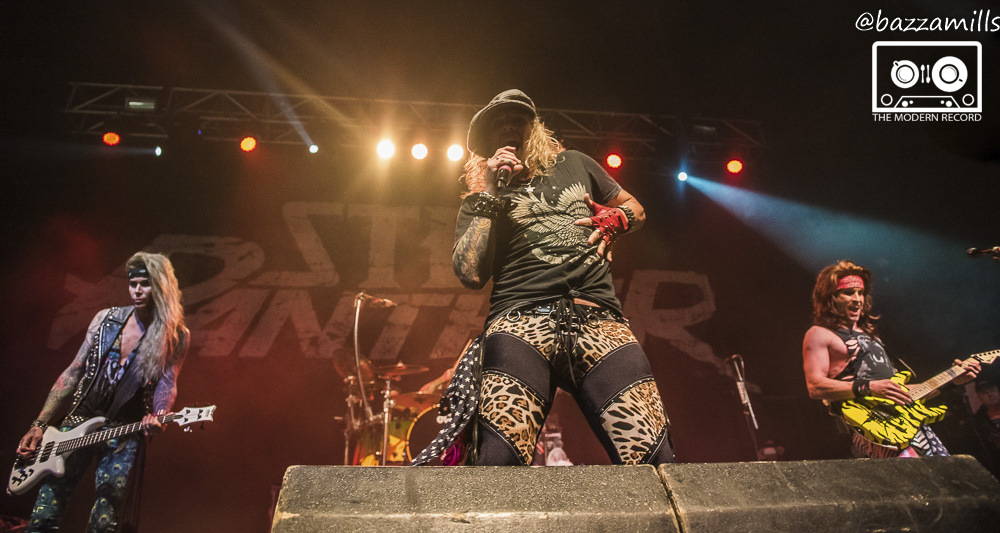 Between songs Satchel was rating the girls in the crowd and giving them all the visual encouragement they needed to know what he wanted them to do to him as well as suggesting that the girls on their partners/friends shoulders show him their Breasts…..which to my surprise they duly did in almost every case.

They then fired through Asian Hooker, Tomorrow Night, Wasted Too Much Time and Poontang Boomerang. With the sell-out academy crowd urging them to speed up the turn over of tracks with a chorus of ‘here we, here we, here we fuckin’ go!’ which backfired a little as the band improvised to create a metal backing for the chant.

Then Satchel played possibly one of the more entertaining guitar solos I’ve seen live, these things can just be a waste of time and truly boring but his energy, ability and sense of comedy really engaged the crowd. He interspersed the showing off with some classic riffs Sweet Child O’ Mine, Rock You Like A Hurricane, 2 Minutes To Midnight, Iron Man, Master Of Puppets and Eruption, he got behind the kit and provided a bass drum beat to it all.

The band back on the stage and a Gibson Acoustic Guitar on a Stand and they played That’s When You Came In from the new album then Styx came down off the drums to play keyboards to Weenie Ride, Satchel commenting that it was the first time he had played an instrument that made music.

Then they invited girls to join them on stage, about 20 girls got up there and the band had a fairly good case for sexual assault as at least one girl grabbed Satchel’s crotch and another few were trying to force kisses and all sorts out of the band…….I found all this hilarious but cringed a little too. The Panther played 17 Girls In A Row, got rid of the girls complete with passes for later on I assume, then played Gloryhole.

The main set finished with the anthem Death To All But Metal which the Glasgow crowd chanted along to. Then the chants went up for the encore like it wasn’t in the script. Out they came and finished off the night with Community Property followed by Party All Day (Fuck All Night).

All in all, this was a carnival of non PC sexual banter, hinting at the Motely Crue, Van Halen days of Drugs, Groupies and Metal, all done with tongue firmly lodged in cheek. A great gig, great riffs, solos and tunes all delivered by a tight, slick, well-drilled band……..the only downside was the amount of between-song chat. But I would thoroughly recommend, note not a show for the easily offended.